Ashley Deutser has always felt passionate about empowering youth. Two years ago when Youth Philanthropy Connect partnered with the Greater Houston Community Foundation for its Southwest Gathering, Deutser was part of a group of youth philanthropists from Houston who helped planned the conference. She has since planned several youth events with the Greater Houston Community Foundation and has been an active member of YPC’s Leadership Team.

While youth philanthropy at Greater Houston Community Foundation is relatively new, Deutser spoke had a hand in developing the first ever Family Giving Circle, where she serves on the inaugural teen leadership committee. Youth whose families are in the circle can sign up to be on the group’s leadership team—which will then pinpoint one area of need in Houston, solicit grant applications, go on site visits, and eventually pick which organizations to fund.

Deutser didn’t know much about youth philanthropy before she was introduced to YPC. “I didn’t know that things like YPC existed—places where they wanted youth to be more involved. And I think that’s so awesome that I’ve been able to learn so much about the crazy number of youth programs,” she said. 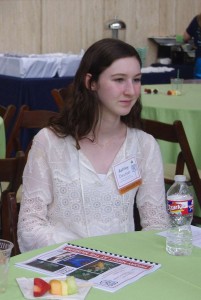 As an essential member of the YPC team, Deutser played the role of planning committee member, speaker, and session facilitator at YPC 2016 International Conference in Anaheim, CA this summer. One moment from the conference particularly stuck out to Deutser—“When I sat in on the social justice session with YFYI, I really liked that and thought it was really cool how they’re making a difference in their communities and how the city is giving them money and wants them to make a difference.”

After learning so much from her peers in San Francisco with YFYI, Deutser sees the value in YPC’s network of youth philanthropists from all over the country. “It’s so great to meet everyone from such different places and learn about what they do in their communities and how it’s different from mine,” she said. As a senior at the Kincaid School, Deutser is already working on her college applications, looking forward and thinking about her future. Even before finishing the summer, Deutser knew one thing about her future to be certain: “I’ll always work with nonprofits since that’s what I’ve been doing since I was little. I’m really passionate about it and can’t imagine doing anything else.”