When Ashley Rodriguez joined the San Francisco youth-focused philanthropy program Youth Funding Youth Ideas (YFYI) five years ago, she was a program officer. She has since been promoted to senior peer advisor and now mentors and supports community youth programs.

As a first-generation college student at the University of San Francisco, Rodriguez is studying child development with a focus on youth work. She interns at the school’s ethnic studies student research center, and, along with a her job at YFYI, she works for a citywide initiative called Roadmap to Peace. With a resume like hers, it’s no surprise that Rodriguez wishes to pursue a career in community and policy work. 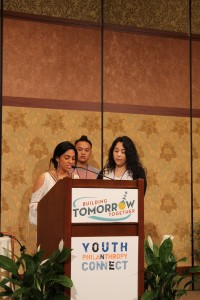 One distinctive program that Rodriguez has helped fund through YFYI is Project WHAT—an organization that seeks to increase awareness of the rights of children whose parents are incarcerated. “They started with just seed money, just a couple grants from us and now they’re a huge organization,” she said. “I really like it because I feel like they target an issue that I feel like no other organization that I’ve come across focuses on that.”

But YFYI has given Rodriguez more experience in the philanthropic world than just funding grant applicants. She works directly with youth programs in San Francisco, creating curriculum, facilitating workshops, and acting as liaison between the youth and adults in these programs.

Moving forward, Rodriguez is focused on rectifying social justice issues plaguing her community. Gentrification, for starters, has become a “huge issue” in parts of San Francisco, according to Rodriguez. “A lot of families are being displaced —they’re being pushed out of different areas in San Francisco,” she said.

Other issues she is passionate about are female empowerment and gender equality. Not only noting the different struggles for women of color, but also the issue of pay inequality in the workforce. “I feel like there’s not enough to empower young girls growing up …. I strongly believe in the idea of self-care and self-love, and that’s something that should be promoted more.”

After attending the YPC 2014 Conference in Anaheim, Rodriguez thought, “Oh, I guess it would be really tight to be a part of the Leadership Team.” Before that summer, Rodriguez was completely new to the idea of people gathering to discuss philanthropy—and now, she helps plan those gatherings.

“After going and seeing how diverse people’s models were in the background, I just wanted to be more involved in it,” she said. “I think YPC is a very good platform for young people to reflect on how they do the work differently, and how they can support each other.”