Skip to content
Meet Gordon Phung: Advocating From the Heart

Growing up, Gordon Phung was affected by social issues—he just didn’t know it. It wasn’t until his freshman year of high school when he joined Youth Funding Youth Ideas (YFYI)—a San Francisco-based youth philanthropy program that funds $100,000 of youth-led community projects annually—when Phung learned the technicalities of the gentrification and immigration injustices his family has endured for years.

The 18-year-old senior at Galileo Academy of Science and Technology has been a member of YFYI for four years, and now serves as the Youth Evaluator. Though he will be graduating high school and moving away soon, he isn’t in any rush to leave. “I’m really sad that this is probably my last year in YFYI because I’m going to college soon,” Phung said. He did, however, add a hopeful note: “I do seek to continue my social justice work.”

YFYI’s calendar year is divided into three fiscal parts—three grant cycles. Phung spoke of one project that YFYI has funded for the past 10 years: Project WHAT! (We’re Here and Talking). It’s an organization that educates children with incarcerated parents on their rights within the legal system, and helps bridge broken relationships within families. According to Phung, the success of Project WHAT! would not be possible without the funding from YFYI. 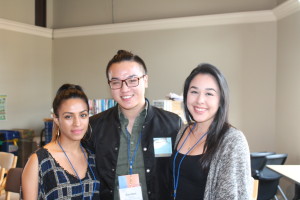 poverty in Ho Chi Minh City, Vietnam (Phung’s home country). Phung started the project after visiting the city last summer and seeing the horrifying effects of poverty on children’s lives. “With my own eyes, I had witnessed little kids selling lottery tickets, bracelets, and packaged foods for a living,” he wrote in an email. “In order to make enough money to eat, these kids need to sacrifice their education no matter how much they want to learn. This is when I knew I had to do something.”

In addition to school supplies, Phung is striving to provide the community with translators and tutors to provide the city’s youth with better educational opportunities. “As a social justice philanthropist, I know my work isn’t done when I have provided the tools for their success,” he wrote. “I also need to provide the support.” Phung’s efforts on this project are still on-going.

On a personal note, one social injustice that Phung is particularly passionate about, however, is environmental justice. He plans to major in environmental biology in college in the fall.

As a second year member of Youth Philanthropy Connect’s Leadership Team, Phung is looking forward to the 2016 International Conference in Anaheim, CA. He attended his first YPC event this past fall in Seattle, WA. “From the Seattle conference I learned a lot about other philanthropy work,” Phung said. “Because, I feel like our philanthropy work is very different from others’, it’s great to come together and share our knowledge about social justice.” He first learned about the Leadership Team from a current and long-standing member Ashley Rodriguez, a colleague at YFYI.

One thing is clear about Phung—he loves what he does. The youth philanthropist is engaged in videography and photography aside from his charitable work, and was an avid athlete in track, wrestling, and volleyball before setting down the athletics to make room in his schedule for his philanthropic work. Phung does not sound like he has any regrets over the matter: “I’m really just passionate about my work,” he said. “Every year we get to spend $100,000 on bettering the community. I feel like that’s really amazing.”