Skip to content
Meet Kylie Semel: A Leadership Team Member Who’s Been There Since the Beginning

When Kylie Semel was 11 years old, she, her sister, and her cousins had an idea. As a member of the Frieda C. Fox Family Foundation’s Junior Board, she wanted to meet other youth grantmakers that were doing the same thing as her. She and fellow Junior Board member Katie Marcus-Reker had met with youth from another family foundation, and together they proposed having a gathering at Disneyland Resort to meet other foundations with youth programs. And thus, Youth Philanthropy Connect was founded.

“That first conference was the first time that I was meeting a big group of people that had been doing similar things as me,” Semel said. “I didn’t have to explain what I was doing—it was so nice to find people that knew and understood all of these words like ‘philanthropy,’ because a lot of my friends, at that age, were always just so confused.”

In 2011, Semel and youth from three family foundations came together.  Since then, YPC has grown into the amazing youth-led effort it is today with 21 young people leading the effort.  Since its formation, Semel has seen the growth of YPC from its small conference in 2011 to forming a youth leadership team to advise the work that has more than doubled in size to date!

YPC is not the only thing Semel has seen transform over the years. She is a junior at the Marlborough School in Los Angeles, CA and has been a member of the Frieda C. Fox Family Foundation’s Junior Board since December of 2007. As such a long-standing member, Semel has experienced the introduction of the Junior Board’s collaborative grants with a unique perspective. “We’ve really been able to see how making grants with big groups of people takes place, so that’s been a really cool experience for us,” she said. 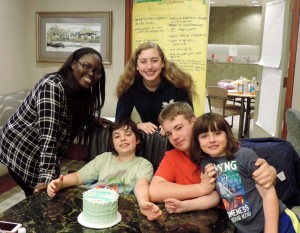 On the Junior Board, there are individual grants, and there are collaborative grants. Each year, the junior board chooses a theme and 2015’s theme was Life and Leadership Readiness. Then, a request for proposals is released, and the junior board selects grantees based on their capabilities to serve their communities within that theme’s scope. The members also individually find organizations to grant $2,000 for their individual grant. The organizations selected for individual grants are then invited to apply to the Junior Board’s collaborative grant cycle.

The collaborative grant this past year, Semel said, gave the Junior Board members a chance to examine the challenges of an older demographic than what they are used to. With a theme of Life and Leadership Readiness, a board that often gives to young kids in middle and elementary school, according to Semel, had the chance to look at programs aimed at high schoolers. “That was really cool for me because I got to help people that were directly my age, who don’t have the same opportunities that I have, which was a really nice experience,” Semel said. One nonprofit that Semel particularly gushed about was a group called No Limits—a group dedicated to theatre education of deaf and hard-of-hearing children.

As for her most recent individual grant, Semel recommended her allotted $2,000 to 24th Street Theatre in Los Angeles, a safe space that facilitates shows between the community’s youth. This grant follows the trend of Semel’s passion for arts education.

It’s no surprise that arts education strikes such a cord with Semel, as she has been creatively engaged in arts education since she was 2 years old, taking ballet, jazz, modern, and pointe dance classes.

The Junior Board has really influenced Semel, who intends to one day join the board of the Frieda C. Fox Family Foundation. As for the conference this summer, it makes sense that what one of YPC’s founders is most excited about are the familiar faces from over the years. “I love seeing people from past years,” she said, “and then meeting a ton of new people.”