Skip to content
Sarah Saltzman: A Social Activist in the Making

As a young person who grew up in a nonprofit run by her grandmother and inspired by her mother’s father, The Jester and Pharley Phund, Sarah Saltzman had a lot of volunteering experience but didn’t know what the Frieda C. Fox Family Foundation’s Junior Board was when its founders asked her to join. She was in middle school at the time. Now a Junior at Crossroads High School in Santa Monica, Saltzman is a long-standing member of the Junior Board, as well as a two-year member of Youth Philanthropy Connect’s Leadership Team.

This year marks the second round of collaborative grant cycles for the Fox Foundation’s Junior Board. The 2016 cycle, in which Saltzman had a heavy hand in decision-making, focused on mentoring teenagers in organizational and leadership skills.

She has exercised her passion in social justice through 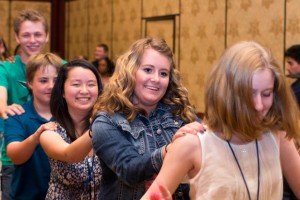 her individual grant-making to foster youth programs. This issue is of particular interest to Saltzman, having a close friend currently enduring the flawed system. “It’s really terrifying listening to her talk about it and makes me so sad that kids are going through that,” she said. “I wanted to put these resources toward helping children in those situations.”

While this issue lies close to her heart, it is not the only issue on which Saltzman has focused her efforts. She’s advocated for LGBTQ and women’s rights, as well as female empowerment, through her philanthropic work.

“I looked forward to [the conference] every summer, and I thought it was such an amazing experience meeting all these different kids from across the country.”

As if tackling these heavy issues weren’t enough, Saltzman spends whatever free time she has not in school or grant-making in a plethora of extracurriculars—as co-president of the computer science club, a leader on the engineering team, a flourishing artist and animator, and a volunteer tutor of math and English.

With only a few years of Junior Board experience under her belt, Saltzman was not sure that she was well-versed enough in the philanthropic world to join the Leadership Team at first. After attending YPC’s conferences annually, however, she eventually wanted a more active role in conference planning and joined. “I looked forward to [the conference] every summer, and I thought it was such an amazing experience meeting all these different kids from across the country,” she said. “It exposed me to such a wider array of people and of aspects of the philanthropic world, and I wanted to engage in that on a deeper and more interactive level.”

What struck Saltzman most about the Leadership Team is the self-sufficiency of the youth in terms of conference planning. “You get to see what’s going on behind the scene of this really fluid, professional thing,” she said, “and it’s a bunch of teenagers. Which is so cool because I’m a teenager, and I get to be a part of making that happen.”

The future is a little unclear for Saltzman at the moment. With college applications approaching, she has found herself imagining many different career possibilities—but she hasn’t ruled out making a life of professional giving. “There are number of different paths I can see myself going down, but nonprofit and philanthropic work is definitely one of them.”